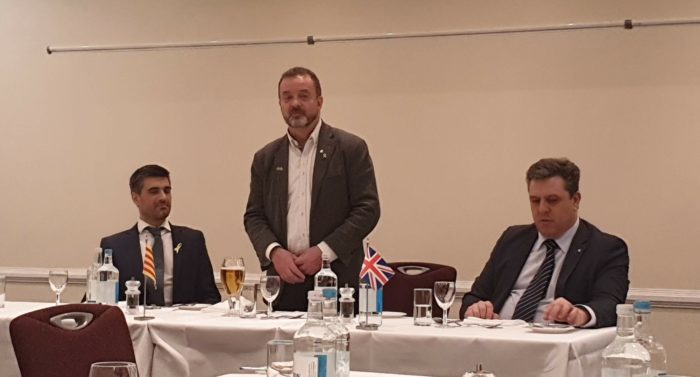 END_OF_DOCUMENT_TOKEN_TO_BE_REPLACED

This is a translation of an article I wrote for the Catalan newspaper VilaWeb entitled “La UE pot protegir els nostres drets fonamentals?“. VilaWeb publishes some of their own articles in English here.

Two and a half years ago, we Britons voted in the Brexit referendum.

The European Union represents a great co-operation between countries, an economic power in which 28 nations can fight together for their interests, their economies, etc. For its citizens, the possibility of travelling and working in any European country is a right which makes the world – or, at least, the countries of this union – a little smaller and more open. Despite the mottoes of the far-right, were are all one race and we should be brothers and friends. We should live and work together.

At heart, I am a democrat. I believe in the sovereignty of national and regional parliaments. I believe, above all, in democracy. If the European Union wants to represent Europeans, before anything else it has to defend democracy and human rights. It has to defend these parliaments and rights with all of the strength which the member states give it. But it does not.

END_OF_DOCUMENT_TOKEN_TO_BE_REPLACED

The Spanish Council of Ministers will today approve the change of name of Barcelona-El Prat Airport, which will be called Josep Tarradellas Airport. Sources at the Moncloa have confirmed the news, adding that ‘it is a decision which is loaded with symbolism, communicated to the Generalitat and the family’.

Indeed, the decision was communicated to the family, who were informed days ago and gave permission to use the name of President Tarradellas. But the Generalitat, according to sources in the Catalan Government, have not been able to have their say, and complain that the change was not agreed upon, recalling that there are naming commissions to manage and work on decisions like this one. The Catalan Government have requested that the Spanish Government rectify the decision and not go ahead with approving the change of name.

The General Secretary of ERC (Republican Left of Catalonia), Marta Rovira, as leader of Tarradellas’ party, has criticised the decision:

This is a translation of an article from Catalan newspaper VilaWeb entitled “L’eurodiputada Carolina Punset abandona Ciutadans criticant la dretanització del partit i la posició sobre Catalunya“. VilaWeb publishes some of their own articles in English here.

The MEP and former Ciudadanos (Citizens) organiser at the Corts Valencianes (the Valencian regional parliament), Carolina Punset has announced to the leadership that she is leaving the party. She did so in a strong letter, published by Spanish newspaper eldiario.es, in which she criticises the party’s turn to the right on economic and social questions, position towards Catalonia and change in energy policies.

Punset criticises that the party maintains a single political policy for a short period of time, which has made them forget ‘where they came from and where they are going’. ‘We have gone from holding mild policies against nationalism in order to look to secure the moderate catalanist vote to being “the most Spanish” of all,’ she says. According to Punset, from the beginning she defended ‘the idea of citizenship and civil patriotism across the territories’, which has been lost. ‘Walking with flags goes against the DNA of the Ciudadanos which I joined’, she laments.

‘I do not believe that anyone doubts my aversion to any form of nationalism or my Jacobinism, which I have unashamedly defended. However, that does not stop me from affirming that the situation of civil confrontation has reached the point where it is necessary to be open to listening to political opponents’, she says. Specifically Punset criticises the imprisonment of politicians and pro-independence civil society leaders: ‘Prison can never be good news.’

The MEP denounces that anyone who differs from Albert Rivera’s position is marked and spied upon, ‘as KGB agents did’. ‘They tell you off because you have spoken with Puigdemont, with people from ERC (the Republican Left of Catalonia), with anyone who is not from the 155 block. It’s a pity.’

Furthermore, she says that, as a feminist, she feels ashamed when they talk of ‘gender ideology’ or when ‘they consider acts which are really sexist terrorism as family violence’. She also criticises that they deny the need for electoral lists with parity of representation, ‘even though where they are not imposed there are not enough women represented’.

She adds that her guts churn when they suggest ‘regulation’ of prostitution, which she believes is a euphemism for legalisation, and legalising surrogate mothers. ‘Bearing in mind the cases of “women farms”, we must be more careful’, she believes.

She says that if it has taken her so long to leave the party, it is because she sees it as an injustice that it is her who has to leave ‘when it is the leadership which has made the political defection to be the white brand of the Partido Popular’. Punset will continue to be an MEP, now as an independent member of the liberal group.

Delighted to see at least one ot Medway's three MPs on this list twitter.com/Jamie4North/st…

When I was younger I saw a TV drama about someone with a mental health problem who was taken in by a family. Her behaviour became more erratic, until they eventually kicked her out. She said "it's ok, everyone abandons me sooner or later". That line has always stuck with me 😢

@neilrpickles My masters is distance learning, and we've been told there will be no face-to-face sessions until after Christmas, at the earliest, which suits me just fine

@HaryMcormack198 Don't know enough about most of them to comment, but as a general rule of thumb it should be the clear will of the people following an informed debate and free & fair referendum

@MattDoy47854025 @KieDams @Jake_W_Roberts To be fair (*shudder*) that was also a Tory manifesto commitment in 2010, so there was little doubt that would make its way into the coalition agreement

@KieDams Yes!! I thought it was just me!

.@Wera_Hobhouse: "If you served in the coalition and describe yourself as centre-left, you must repudiate your involvement with that government" newstatesman.com/politics/uk/…

@josepgoded Dialogue only works when both sides are willing to compromise

@jordanhartley89 When you get to the point of being blocked by your former election agent, hmu 😜

@gardner_kye Tough one! Paul Merton is funnier, but Ian Hislop has a knack for knowing just what to say and when to say it

Ok, but if my hair looked even half as good as this in the morning I wouldn't be feeling quite so desperate to get it cut pic.twitter.com/b7uKN9pmeH