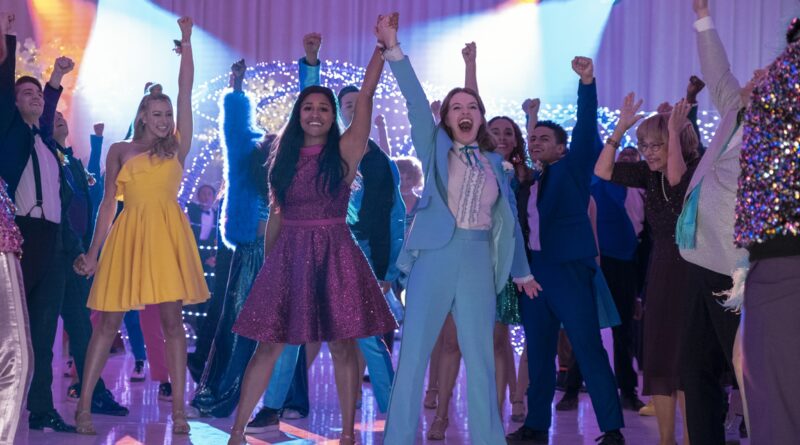 When The Prom premiered in Atlanta, Georgia, in 2016, it was perhaps only a matter of time before someone sought to bring the stage musical to the big screen. In fact, the show had only been running on Broadway for six months when director Ryan Murphy announced he was doing just that for streaming giant Netflix.

Like any teenager, gay student Emma Nolan wants to bring her partner to the high school prom, but the PTA breaks into a homophobic rage and, on discovering they cannot ban her from the event, cancels the prom altogether, causing Emma’s classmates to bully and harass her for ruining the biggest night in the school calendar. Meanwhile, two narcissistic Broadway stars are wounded by crushing reviews of their latest show and decide to jump on the Emma bandwagon with fellow out of work actors to generate positive publicity. Following a successful legal challenge backed by the school’s principal, the prom is back on, but is all as it seems?

This is, sadly, more than simply a reimagining of a classic high school love story for the modern era. The Prom was inspired by the true story of Constance McMillen who, in 2010, was refused permission to take her girlfriend to her high school prom in Itawamba County, Mississippi. After she began legal proceedings to challenge their refusal, the school board cancelled the prom entirely. The school’s parents organised a private prom, but sent McMillen and her date to a fake prom attended by just five other students. Amidst the subsequent media storm, celebrities rallied round McMillen, and after a US District Court ruled that the school had violated her First Amendment rights, the school paid McMillen an out of court settlement of $35,000 and agreed to create a non-discrimination policy which included sexual orientation.

Unfortunately for this legal geek, the courtroom drama in The Prom takes place off-screen. Instead, viewers are treated to two hours of over-the-top song-and-dance routines, interlocking stories of tragedy, love and redemption, and that James Corden performance.

Speaking from the perspective of a bisexual man, I was more distracted by Corden’s absurd, almost comical, American accent to notice whether his portrayal of gay Broadway star Barry Glickman was “gross and offensive” on the first watch. Corden himself said he was “very proud” of his performance and that he drew on the guidance of the film’s queer director, so I will leave it to others to reach their own conclusion.

Whilst Corden’s portrayal prompted criticism, the film’s overall LGBT+ credentials are impressive. For a story told half in song, it is suprisingly strong on the themes of injustice, prejudice, bigotry and the struggles of teenagers frightened to be open about their true selves. The role of Emma was handed to queer actor Jo Ellen Pellman, who shines in her film debut, while Emma’s girlfriend Alyssa Green is played by queer actress Ariana DeBose. Her namesake Ariana Grande was originally cast in the role of Alyssa, but after watching the film it is difficult to see where she could have added to DeBose’s stellar performance.

Although Grande was forced to drop out due to conflicts with her world concert tour, The Prom is not short on a star cast. Meryl Streep, Andrew Rannells and Nicole Kidman are entertaining alongside Corden, while Keegan-Michael Key, Kerry Washington, Kevin Chamberlin, Tracy Ullman and Mary Kay Place provide excitement, fun and emotion in their supporting roles. Despite their credentials, however, none shine as brightly as Pellman, who settles naturally into her leading role full of the “soul and spunk and spirit — and that amazing smile” that prompted Murphy to hand the newcomer her long overdue break.

The mostly upbeat and vibrant soundtrack was written by Chad Baguelin to music by Matthew Sklar, and as the cast put their own unique spin on the musical numbers it is difficult to choose a standout song. This is by far Streep’s strongest musical performance, nowhere more evident than in her powerful rendition of It’s Not About Me early on in the film, but Pellman’s performance of Unruly Heart will tug on the heartstrings of the straightest of viewers and resonate with many in the LGBT+ community.

As far as high school musicals go, The Prom will never reach the cult status of Grease, but with its overriding themes of tolerance and self-love, and its reminder that LGBT+ teens can find happiness even after facing rejection from within their own family, it brings a positive message to young people who may be questioning their sexuality or facing discrimination for who they are.

For that alone, despite its flaws, The Prom deserves a solid 4/5 stars – alongside its own brand of tissues, because trust me: you will need them by the end of the film!