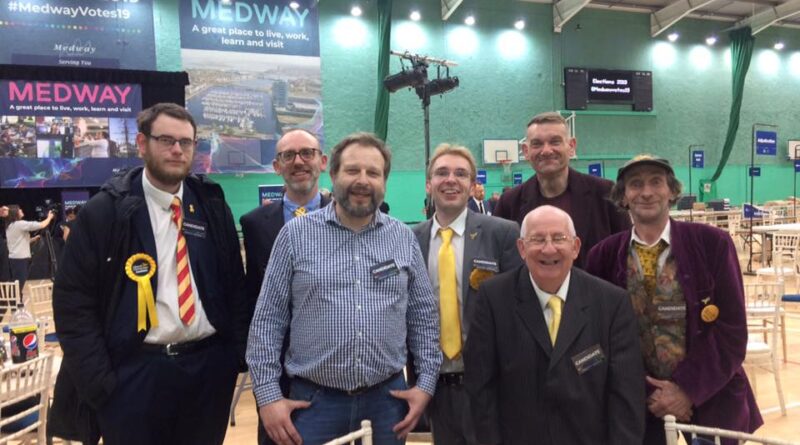 I have a confession. Shortly before Christmas, I was on the verge of leaving the Liberal Democrats.

At that time, there were a number of issues locally which were causing me great concern, and it got to the stage I was just about ready to walk away. But then one of the primary drivers of many of those issues left the party, and I became determined to stay and help the local party move forward, as treasurer.

The Liberal Democrats, after all, used to run Gillingham Borough Council, and were the second largest party when Medway Council was created. Losing our last 3 seats in 2015 was an injustice which needed to be overturned.

I therefore reaffirmed my commitment to standing as a paper candidate in Gillingham North and helping the party campaign in its target wards as much as I could.

Then, towards the end of February, as it became clear that we only had one target ward, I was asked whether I would like to stand as one of the party’s candidates there, filling the void left by a departing candidate. I gave it some thought and accepted fairly quickly.

I should point out for context that, at that stage, I did not expect to win. Putting the groundwork in and building a reputation for hard work and action – one of the primary drivers for electoral success for anyone other than the Tories and Labour at local elections – was impossible to do in the space of two months. My expectation was that we would hit the ward hard and regain some of the ground lost in 2015, but that we and Labour would cancel each other out and let the Tories win both seats.

My starting point for our base in the ward was Paul Chaplin’s result in 2015. Diana Smith had a huge personal vote which had helped her to buck the national trend and beat Labour, but Chaplin had polled behind both Labour candidates in a ward they did not seem to have taken seriously, except as far as the general election was concerned.

I was not concerned about the Conservatives, although they were, as the incumbents, our primary opposition. From day one I knew our problems would be caused by Labour. For many years the Liberal Democrats had won with the support of Labour voters who knew Labour could not win in Watling, and lent their votes to hard-working Liberal Democrats against the Tories.

The result in 2015 showed that was no longer necessarily the case: if they could beat a Liberal Democrat candidate, they could beat the Conservatives, too. And they knew it. Labour selected two strong candidates for the ward last year and they campaigned hard from day one. Winning back Labour voters would be an uphill battle.

But from the off we threw everything we had at the ward. During the campaign we delivered over 8,000 leaflets, knocked on over 2,800 doors and had over 900 conversations with residents. That was, without a doubt, more than I thought possible at the beginning of March, and I owe an undoubted debt of gratitude to every volunteer who played their part, however small, in making this possible.

It wasn’t, however, enough. To their credit, Labour threw the kitchen sink at the ward and managed to take one of the seats from the Tories on an otherwise mediocre night for them. The national trend of Labour and the Conservatives losing to the Liberal Democrats and others seemed to have passed Medway by, with only two of the Council’s 55 seats not being from either of those parties.

Overall in Medway, we increased our share of the vote by just 1.3%. Progress is progress, and it has shown that we are not entirely down and out, but it was still clearly an outlier in a nationwide Liberal Democrat surge.

So what next for the Medway Liberal Democrats? Well, that is for the party to decide together, and I look forward to working with my party colleagues on a plan for where we go from here. What I will say, however, is that no one individual is more important than the party, and our decisions will be taken, as they always have been, with the liberal and democratic values of our party at heart.

With apologies to my running mate Martin, who it has been an absolute pleasure to work with these past couple of months, and every other Liberal Democrat candidate across Medway, on a personal level it gave me a small boost when it dawned on me that I had received the highest number of votes and the highest share of the votes of any Liberal Democrat candidate in Medway. It was also a pleasure to beat UKIP in Watling when they had over 10% more of the Medway-wide share of the vote than I did.

So what next for me? The honest answer is, I don’t know.

Four years ago I vowed never to stand for election again. A lot happened in the intervening years: I moved to Barcelona, moved back, got married, got divorced, changed jobs twice and much more besides. I’m hoping the next four years will bring perhaps a little less excitement, but who knows.

In the short term, my focus will turn back to the political situation in Catalonia. Last night I spent the evening sharing Tapas with the wonderful Foreign Friends of Catalonia, and I am looking forward to returning to campaigning for Catalonia’s democratic and fundamental rights in earnest.

I will not, for many long and complex reasons, be campaigning for the European elections. I don’t even know if I’m going to vote in them yet. But that’s another story for another post…

In the long-term, who knows! Without going into detail, my present personal circumstances are not sustainable and require drastic change. I don’t know how or from where that change will come, but I know with certainty that, if it doesn’t, I won’t be here to fight an election in four years’ time – and it won’t be because I’ve moved away again!

I put that, and many other things besides, on hold to focus on the election campaign. Now it’s over, I need to focus on salvaging what’s left of my life, if it’s even still possible.