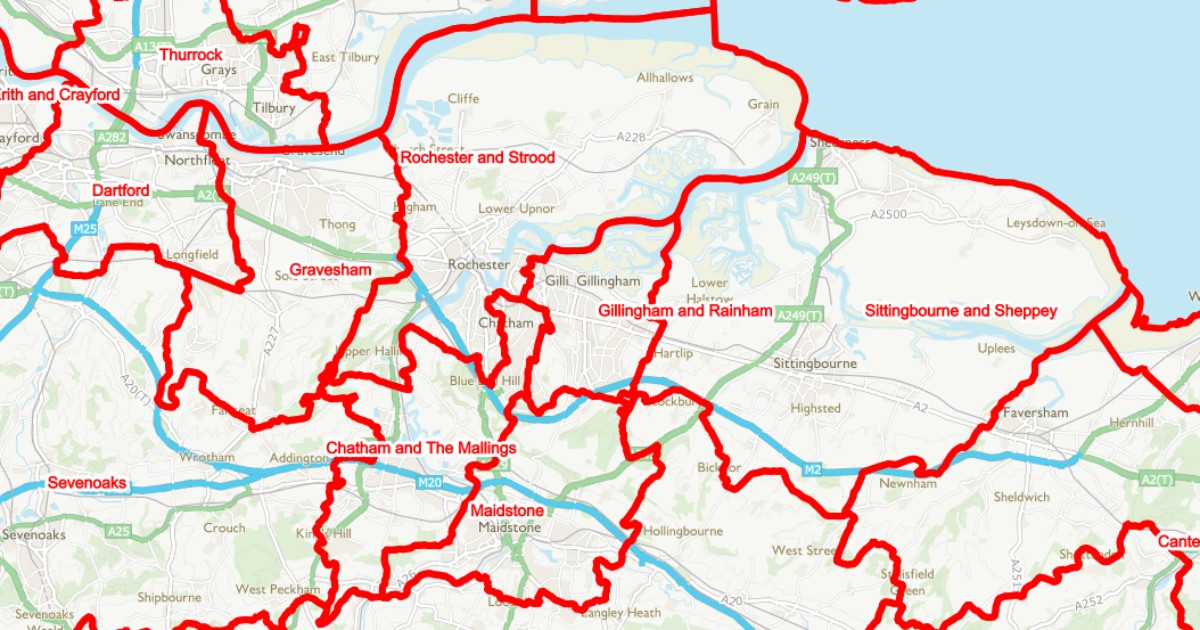 The Boundary Commission’s proposals for new parliamentary constituencies, which will be put before MPs in 2018, have been published – and the changes for Medway are largely underwhelming.

In fact, if you live within one of Medway’s 22 wards, the chances of the constituency you live in changing is less than five per cent, with only Lordswood & Capstone moving. However, all three constituencies covering the Medway Towns could see changes, with only Gillingham & Rainham containing exclusively Medway constituents.

Under the Boundary Commission proposals published today, Lordswood & Capstone ward would cease to be a part of Chatham & Aylesford, and instead be represented by Gillingham & Rainham.

The biggest change, though, is reserved for Chatham & Aylesford. Although the only change for Medway residents is the loss of Lordswood & Capstone to Gillingham & Rainham, the constituency has gained four wards from Tonbridge & Malling Borough Council.

A previous review was carried out under the coalition government, but was vetoed by the Liberal Democrats despite earlier pledging their support in exchange for a referendum on changing the voting system.

At present, the proposals are in the very early stages, and will now open up for consultation with local residents. The Boundary Commission will be holding a public hearing over the proposals at Maidstone’s KCC Council Chambers on 3 and 4 November.

What will be the electoral effect?

All three Medway constituencies were won quite comfortably by the Conservatives in May 2015, so would these changes have made any difference to the results? To find out, I created a projection model for each constituency, which uses both the general and local election results from 2015, to produce comparisons.

Perhaps unsurprisingly, the constituency with the biggest geographic changes also sees the biggest single swing in votes. Both the Conservatives and Labour see a drop of 3.2%, with the latter narrowly squeezed into third place by UKIP. The Liberal Democrats and other minor parties make the biggest gains.

The biggest increase in majority falls to Rehman Chishti, who boasts an additional 3.1% of votes and replaces Tracey Crouch as the only Medway MP with the support of over half of his constituents. Most of this extra support seems to come from UKIP, who lose 1.8% of the vote share, with Labour, the Liberal Democrats and the Greens also dropping votes.

The closest of the three Medway constituencies also sees a small increase in Conservative support, principally at the expense of UKIP. Labour sees a marginal increase in votes, while the TUSC suffers their only fall in support in Medway.

It is worth noting, however, that changes in all three constituencies fall within a reasonable margin of error, and the results under the new boundaries appear to be almost identical to those actually seen in May 2015.

Crucially, with double-digit majorities as a percentage for all three MPs both before and after the changes, any argument that the three seats had been redrawn to boost the incumbents’ respective positions must surely be rejected outright.

Disclaimer: In order to arrive at the projected figures, I analysed the results for each council ward in 2015 compared with the overall constituency result for 2015 and then used this data to calculate approximate percentage figures for each new constituency, based on the wards which they are composed of.

I have weighted as best I can for the differences in general/local election voting behaviour, but it must be noted that this, together with the fact that not all parties stand candidates in every ward, makes an accurate projection extremely difficult.