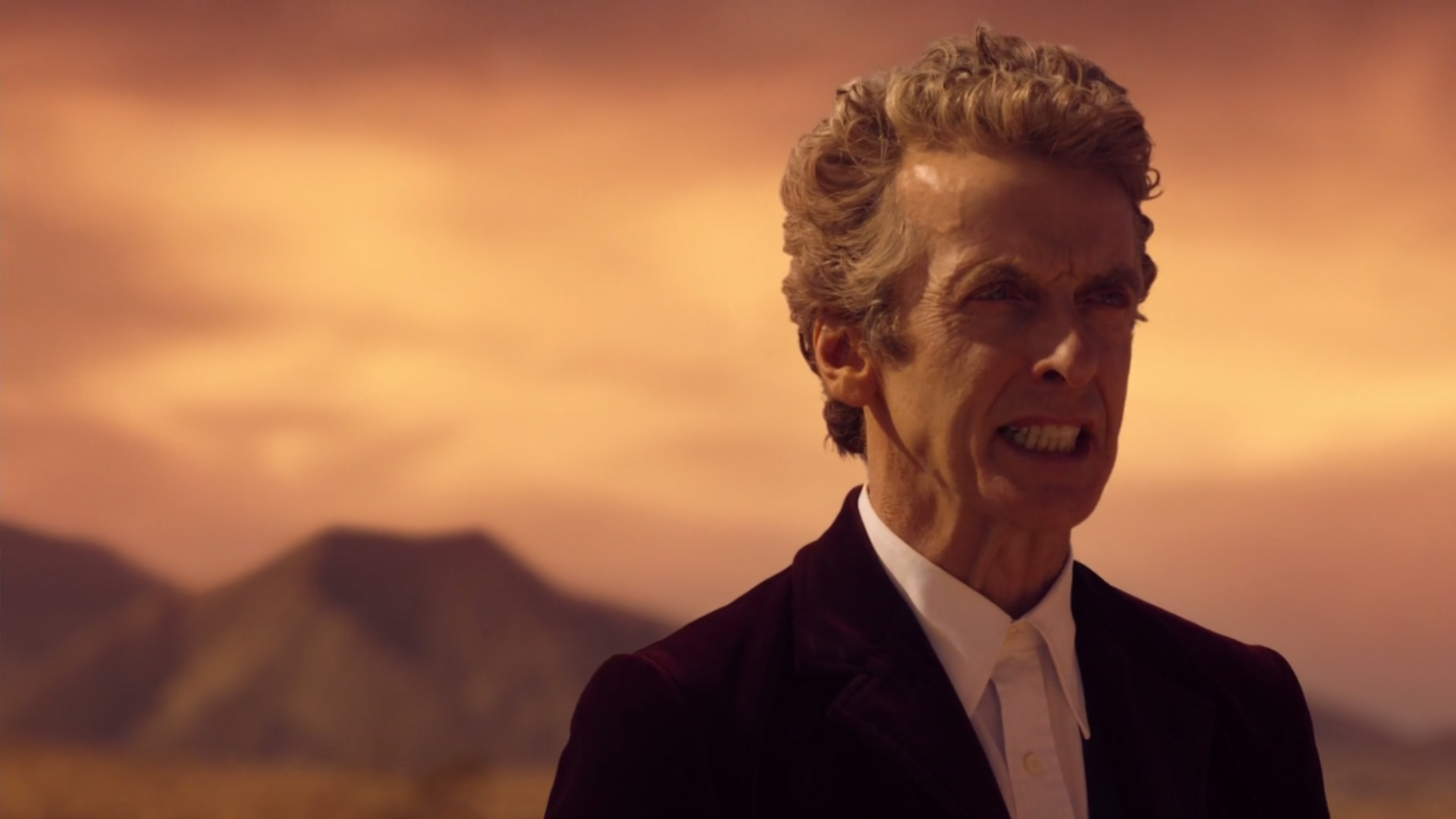 If Peter Capaldi (or at least his eyebrows) doesn’t receive a BAFTA for his portrayal as the Doctor this series, it will be nothing short of a crime against the arts. There are very few actors capable of carrying over 50 minutes of television almost single-handedly and making it something worth watching over and over again.

Before I go any further, a warning: this review contains spoilers! Big, fat, juicy spoilers that will most likely ruin your enjoyment of another otherwise incredible episode if you have not yet watched it. I have left this review enough that most people will have seen Heaven Sent, but if you still haven’t and if you do not want to know what happens, please do not read on. There are also minor mentions of the public revelations – and personal theorising – about next week’s tantalising finale. If you have been avoiding those, too, please do not read on. You have been warned!

In Heaven Sent, the Doctor is a man who is grieving for Clara Oswald and hell-bent on taking revenge (contrary to her instructions in Face the Raven). We learn at the end that the eternal hell the Doctor is forced to live over and over again until he finally reaches Gallifrey is his own Confession Dial – hinted at throughout the episode with the various Time Lord-esque cogs and the very nature of the circular castle. We also learn that he has already spent seven thousand years trapped in this hell, repeating the same torture over and over again, almost as punishment for his own part in Clara’s death, and that he only reaches Gallifrey after two billion years of the same continuous pain and suffering.

Peter Capaldi has already shown his genius when bouncing off Clara, Davros, Missy and countless other friends and foes, but how would he fare bouncing off only himself and a mysterious veiled creature that did not talk? Well, thanks to the script, by bouncing off Clara and ensuring it didn’t feel like a 50-minute extended version of the anti-war monologue in The Zygon Inversion. Capaldi expertly captured the Time Lord’s grief and kept viewers hypnotised as he made his way through the castle, realising that the dust he picked up on stepping out of the teleport was his own burnt body, realising that the skulls at the bottom of the lake were his own and realising that he would have to die in agony many, many times over billions of years in order to reach “home” (which he had mistaken originally for the TARDIS) without giving up his most dangerous confession.

Reverting to the TARDIS as he slowed down time and imagined his way out of every obstacle in a way only the Doctor (or Sherlock, but we’ll let that one slide, Moffat) could, the Doctor proved that even when he’s on his own he imagines there is someone else there to see what he is doing and to ask questions; the knowing glance Capaldi gives to the camera as the Doctor says “I’m nothing without an audience” is both a nod to the devoted Whovians at home and the Doctor’s own vain need to be watched as he exerts his genius. In Heaven Sent, Capaldi showcases his own artistic genius as he switches from anger to fear, from victory to resignation of defeat with impressive ease. This isn’t a 50-minute long monologue, but a work of unrivaled art for which Capaldi must surely receive awards aplenty.

Of course, making television is never a one-man affair – even for someone as good as Capaldi. Showrunner Steven Moffat in particular deserves credit for not only daring to try something different yet again, but also creating a script which makes this format work seemingly effortlessly. Throughout the episode there are subtle hints about what is really going on – and where the Doctor really is – but that does not make the final reveal any less breathtaking. The confessions of the Doctor are a clever way of dramatising the huge change in Doctor Who mythology Moffat was apparently worrying about when planning this series – and the new reason given for why the Doctor left Gallifrey (he was scared, rather than the previously-held belief that he was bored) makes perfect sense, given his closeness to the hybrid.

Impressive special mentions must also go to director Rachel Talalay, who also directed the upcoming series finale Hell Bent and returned to the Whoniverse after last series’ two-part finale Dark Water and Death in Heaven, and the Doctor’s personal composer Murray Gold. Talalay has taken what was undoubtedly a difficult scenario (the Doctor on his own, against an enemy that limps at a snail’s pace) and made the episode as creepy and, in some scenes, utterly terrifying as the script demanded. Gold, meanwhile, has worked hard in creating a unique score which sets the right atmosphere at the right moments to create some truly frightening and memorable scenes.

There was talk in the pre-airing reviews that this episode may divide Whovians and casual viewers. I can certainly see where they were coming from but, for me, Heaven Sent will go down as one of the absolute classic, must-watch episodes of the modern era – and cements in my mind that Capaldi was absolutely the right man to become the Twelfth Doctor.

Who is the hybrid?

According to the Doctor, in the dramatic final twist to the series’ penultimate episode, the hybrid “destined to conquer Gallifrey and stand in its ruins … is me”. Well that clears that mystery up, then. We usually have to wait until the very last episode to find answers to the major plot themes, yet now we know both who the hybrid is and what the Doctor’s Confession Dial contains.

Except, we don’t. Sure, we know what was in the Doctor’s Confession Dial: the Doctor and his nightmares. But we don’t really know who the hybrid is. At least, not really, if you think about it. If the Doctor had said “I am the hybrid destined to conquer Gallifrey, etc.”, then it would be case closed. But remember: Moffat lies. All he has done is narrow the choice down to two, something which becomes all the clearer when you watch the Next Time trailer. According to the Time Lord, the prophecy spoke of a hybrid bred from two warrior races, but all we know now is that one half is not Dalek.

The Doctor may well have been using the first-person pronoun “me”; according to McGann’s Doctor in the TV movie, he is half-Time Lord, half-human (even if most Whovians would rather forget this). Time Lords, of course, showed their warrior spirit during the Time War, even going so far as to create a weapon so powerful that it developed its own conscience. Human history, on the other hand, is defined almost exclusively by war and the history of the world has made legends of fierce and brutal warriors like the Romans and Vikings.

Ah, Vikings, one of the most fierce and brutal warrior races in human history. Could the Doctor, therefore, have been using a name instead of the personal pronoun? After all, we knew from the very end of The Girl Who Died that Ashildr was a hybrid: half-Viking, half-Mire. Since then, she has called herself “Me”, and made it very difficult for casual observers to determine whether she is a friend or enemy. We also know that she is back again next week, seemingly on Gallifrey, thanks to the Next Time trailer – and if she can tame the greatest enemies of the Doctor and allow them to live in virtual harmony on a hidden street in London, it would not be difficult to believe that she could be capable of destroying Gallifrey.

Either way, it is a Moffat story arc at its very best, and he has given us an answer to one of the biggest questions, whilst still leaving us guessing about the truth. Either way, the hybrid is related to the Doctor, explaining why he is afraid and why he ran from Gallifrey. Either way, I have no hesitation in declaring that this series is the greatest of the modern Who era. Either way, I am ridiculously excited for Saturday’s finale.

And, either way, Peter Capaldi still deserves that BAFTA!

“I’ve finally run out of corridor. There’s the life summed up!”

“I just realised that I’m actually scared of dying.”

“The first rule of being interrogated is that you are the only irreplaceable person in the torture chamber.”

“I confess: I know the hybrid is real, I know where it is and what it is. I confess: I’m afraid.”

“The Brothers Grimm, lovely fellas, they’re on my darts team.”

“How many seconds in eternity?”

“Personally, I think that’s a hell of a bird!”

@Ed_Jennings My gaming PC is still in for repair. Very much looking forward to this kind of frivolity once it's back, though

I love our NHS 💙 I love having world-class care & treatment free at the point of use and will always be in awe of the amazing staff keeping it going day & night! I'm not quite so keen on the fact that if your issue is dental & it's outside of office hours you're out of luck 😭

@MedwayPolitics @seatedwarrior Well done, Kate! A much more positive response than the one I got from Cllr Turpin in May! pic.twitter.com/O4P03ONUtG

@Spud_Spalding Does Cllr Jarrett know something you don't?