Every year, each local authority is required to collate and publish allowances and expenses claimed by their elected members.

Councillors are entitled to a basic allowance to perform their duties, with additional allowances payable to those who hold special responsibilities (Leader of the Council, Cabinet Portfolio Holder, Mayor, etc.) in recognition of the additional work involved.

All members are also entitled to claim for travel and subsistence, although this usually excludes items such as stationery and phone calls, which are factored in to the basic allowance.

At the end of the council’s financial year, the authority must calculate how much each councillor claimed (if anything) and produce a basic report with a simple breakdown.

Medway Council’s financial year runs from 1 April to 31 March, and allowances are usually published within four months, with the latest being the 2013/2014 report, which was published in August 2014:

However, given we were now in September and no report had yet been published, last week I submitted an FOI request for the information. On Tuesday, the allowances report appeared on the Council website, albeit looking rushed and possibly incomplete. It wasn’t until I got round to examining it in detail that I realised just how poor a report it actually was.

The most striking detail was that the report had rounded all the figures to the nearest pound. It is, in fact, the first time the Council has not included the pence figures where the amount to be declared was not a whole pound.

(As an aside, I have worded the last sentence very carefully, as the fact that Cllr Tolhurst’s basic allowance was markedly different to those of members who left the council at the same time she was elected to Parliament suggests that she had stopped drawing her allowance some time after her election – seemingly to the end of May 2015 – and not “since [her] election”. Whilst there is, of course, nothing wrong with claiming the allowance whilst also an MP (most simply don’t out of principle – or, if they do, donate their allowance to good causes within their ward), her entry in the Parliamentary Register of Members’ Financial Interests could, perhaps, be worded so as not to imply that she stopped claiming her allowance immediately on her election to Parliament and, in fact, stopped on a certain date. But, I digress…)

So, rather than having the exact figures of allowances and expenses claimed by Medway councillors, we have a roughly accurate report which looks something like this:

Now, like most people, I am not particularly interested in where Cllr Rupert Turpin went that he needed to claim £5 in travel & subsistence expenses, but I am interested enough to want to know whether the journey cost £4.51, £5.49 or £5 exactly.

Indeed, that no reference is made to the fact that the figures have been rounded means that it is unclear what method of rounding has been used (whether only up, only down or both) and whether the figures have been arrived at by rounding the total for each category or each individual item before addition. After all, if two claims were made for £1.51 and £2.51 respectively, then rounding each individual claim would total £5 (i.e. £2 plus £3), whereas only rounding the total of the two raw figures would produce £4 (i.e. £4.02 rounded down).

Readers may think that I am being pedantic, but I would simply ask this question: how is this report “full and complete” if the Council have employed rounding and created ambiguity as to the exact figures involved?

Slightly more disturbingly, though, the report is missing a councillor:

As you can see above, Cllr Chishti is missing from the 2016 report – not even a postscript confirms that he draws no allowance. Yet the same was officially recorded in 2015: 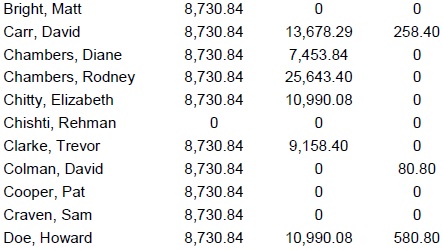 And in 2012, the first full year where he had not claimed an allowance:

Notice how not only do all of these reports include Cllr Chishti, they also include the full figures in pounds and pence.

Readers may think that I am being pedantic, but I would simply ask this question: how is this report “full and complete” if the Council have not included one the elected councillors who served for the reporting period?

Perhaps the most disturbing error in the report, however, falls to this declaration, that Stephen Kearney claimed £992 in expenses.

Not only did Mr Kearney lose is seat on the Council in 2011, many readers will recall he sadly passed away several months ago. Whilst I am sure the author of this report meant that this sum was claimed by his wife Sheila Kearney, who was a councillor at the start of the period (losing her seat in May 2015), it is not only a wholly avoidable error to make, but also potentially insensitive, given Mr Kearney’s passing.

Readers may be wondering whether there is a serious point to this post and I would argue that there is. Medway residents pay their Council Tax every month (or every year) which, in turn, funds councillors’ allowances and expenses. As public money is used, there is, rightly, an expectation that the Council will be transparent about where such money goes.

Of course, none of the elected members named in the report are at fault – it is not their responsibility to compile this report, but the responsibility of the council officer who was given that task. We may never know which particular council employee felt such apathy for the reporting of the use of public money, and it really does not matter. The real concern is that the report carries the name of the Council’s Chief Executive, Neil Davies, which suggests that he has signed the original as a complete and true record.

This report is far from a complete and true record and simply cannot be trusted. The Council must act to rectify the errors in the current report and ensure that, in future, full transparency is genuinely full – and accurate.

All allowances information is published on Medway Council’s website and subsequently added to Medway Elects in a more readable format. However, in case the Council should be so efficient as to replace it with fuller and more accurate report, I have placed a copy of the current garbage for all to see here.

UPDATE: @medway_council are revising the report. Apparently, “some inaccuracies have been pointed out” to them… pic.twitter.com/HKxwSHKGEL

Medway has been placed in tier 3 for anyone still getting this message pic.twitter.com/UPuuD8GW4G

This week will be the first week I've worked a full 5 days since October. It's going to feel weird...

@HannahPerkin I made it to the AGM, if that counts 😉

Still the only time I've ever cried watching Doctor Who 😢 twitter.com/bbcdoctorwho/s…

Today is day 50 of my term as @LGBTLD treasurer. Thrilled to say no one objected to my continuing role for a full term in 2021, given I've barely got started 😅 twitter.com/LGBTLD/status/…

Some bright spark(s) decided to schedule the @SELibDems and @LGBTLD AGM/conferences for the same day, so today, Matthew, I shall be mostly proving that you can, in fact, be in two places at once 😅

@Ed_Jennings @vincemaple @Scattyjan @AnnaMcGovernUK Given that's the closest thing to a compliment you've ever given me, I will take it as such

The greatest game I have ever watched twitter.com/TheGillsFC/sta…